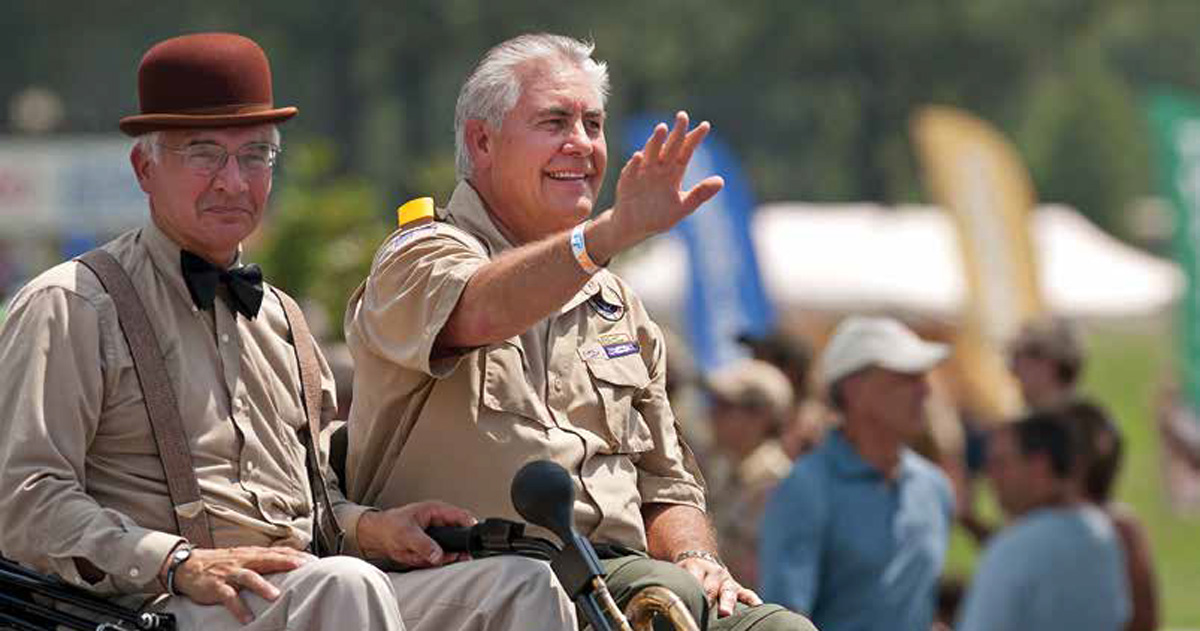 Originally published in December 2016 at The American Thinker

In case you forgot — or didn’t know in the first place — so-called “eagle” scout Rex Tillerson, the former president of BSA Inc., is single-handedly responsible for emasculating the Boy Scouts which, as you might also infer, led directly to its deceitful and dishonorable decision to allow females to register as, well, #FakeBoyScouts.

Tillerson engineered this accomplishment as a member of the BSA’s National Executive Committee, as a task greatly faciliated by his BSA successor, Robert Gates.

(Did I mention that Robert Gates was a master CIA spy first recruited in 1996, later appointed to be the agency’s director by president George H.W. Bush?)

It appears even the humble and patriotic Boy Scouts of America was targeted for regime change — and wholesale democide of the movement’s flesh-and-blood members and alumni — by the very best swamp creatures and spooks the D.C. “deep state” could supply.

Dear God in heaven, show mercy on thy flock wearing the uniforms of the Boy Scouts of America and remove from them the soul poison that is LGBTQPA and Third Wave feminism. Amen.

When I was a boy I swore an oath, one I take seriously to this day. It went like this:

On my honor, I will do my best
To do my duty to God and my country and to obey the Scout Law;
To help other people at all times;
To keep myself physically strong, mentally awake and morally straight.

Inherent in this oath are not one, but two moral issues – my duty to God and my oath of remaining morally straight.  These are inextricably linked, and both preclude sexual immorality, among other things.  My duty to God is to obey the laws set down for us by Him.

And that was what Scouting was all about.  While it was not sectarian in nature, it was deeply rooted in America and the Judeo-Christian heritage that informed our culture in bygone days.  Lord Robert Baden-Powell, one of the founders of the Boy Scouts, stated:

Where does religion come in? Well, my reply is … it does not come in at all. It is already there. It is the fundamental factor underlying Scouting and Guiding.

And in his 1908 book Scouting for Boys said, “No man is any good unless he believes in God.”

James West, who headed the organization in its early days, added:

Boy Scouts of America believes that no member can grow into the best kind of citizen without recognizing an obligation to God.

While there is no litmus test on how one believes in God, there is that matter of duty to Him.  Now, all three Abrahamic religions hold that morally straight means sexually pure, or at least sexually restrained, and all three consider homosexuality an abomination.  So does the Bahá’í faith.  So too Zoroastrianism.  Hinduism frowns on it, as do Buddhism and Sikhism.  Unless one takes a “Progressive” view of his faith or adopts some fringe religion, homosexual activity is forbidden.  If it is forbidden, how can one be “morally straight” or do one’s duty to God while embracing it?

President-Elect Donald J. Trump recently announced he is considering Rex Tillerson to lead the State Department.  Tillerson, CEO of ExxonMobil, was, among other things, the former head of the Boy Scouts of America and one of the people responsible for opening the BSA to homosexuals.

It was Tillerson who lobbied to end the “don’t ask, don’t tell” policy of the BSA.  According to a Dallas News story:

Tillerson was instrumental in lobbying the Scouts’ board to accept openly gay youths, said John Hammer, president of the Washington think tank Center for Strategic and International Studies, of which Tillerson is a board member.

“I can’t get into the intimacy of these conversations. But he agonized over this. He prayed on it, and ultimately he came to the conclusion the only thing that can guide him here is what’s best for the young boys,” he said. “I think he became a key leader in helping the group come to a consensus.”

Tillerson pushed the change at the meeting.

As the CEO of ExxonMobil Corp., Tillerson is no stranger to the task of making tough decisions or venturing into uncharted territory because of a change in course. “Regardless of where you were on this decision, it’s also very normal for people to feel like there are winners or losers. I’m here to tell you that’s not true. … There are neither winners nor losers. What’s left after we made the decision to change is the mission, and the mission has not changed. But how are we going to implement the change?”

So resistance to change is tied not to a moral absolute, but rather to a lack of understanding, and there are no “winners or losers.”  The boys lost, but Tillerson fails to see it.

How is opening an organization that involves young boys in close proximity to open homosexuals in the former’s best interest?  Will Tillerson next seek to recruit hookers for them?  These are boys in their early teenage years, after all, and as such, one must question their self-identification as homosexual.  If they do fall into that category, the purpose of an organization like the Boy Scouts is to lead boys away from such things.

The gays and Tillerson got their demands met last year.

This is the classic slippery slope.  The BSA pulled out a thread, and this is where it has led – and it is headed for far worse.  The Canada Scouts followed this route back in the late 1990s with the result that membership dropped off 50%.

… [w]hat kind of a message are we sending to our young people if the very leaders who are teaching Boy Scouts to be brave cannot even find the courage to stand firm and avoid caving in to peer pressure from Hollywood and political activists?

Indeed, the cowardice is worse than the original act.  Doing one’s duty to God requires moral courage – something that appears to be lacking in Rex Tillerson.

Tillerson is a committed Christian, which would normally be a happy development.  However, Tillerson is a member of the notoriously left-wing Congregationalists.  He is also known to be squishy on global warming, favoring some sort of carbon credit trading and having supported the 2015 Paris Agreement.

It also appears that Tillerson is a globalist.  In a speech to the globalist Council on Foreign Relations Tillerson stated:

Should the United States seek so-called energy independence in an elusive effort to insulate this country from the impact of world events on the economy, or should Americans pursue the path of international engagement, seeking ways to better compete within the global market for energy? Like the Council’s founders, I believe we must choose the course of greater international engagement… The central reality is this: The global free market for energy provides the most effective means of achieving U.S. energy security by promoting resource development, enabling diversification, multiplying our supply channels, encouraging efficiency, and spurring innovation.

Sounds more like Jeb Bush or Hillary Clinton than Donald Trump, doesn’t he?

This, in many ways, explains Tillerson’s support for opening the Boy Scouts to homosexuality.  It is the international norm, and if he supports a largely borderless world, sacrifices in old-fashioned cultural norms are going to have to be made.

Trump says he wants to scale back these big international deals, and yet he wants to make a globalist his chief diplomat.

I fear that this pick leaves the stagnant water in the swampland.  Tillerson strikes me as just another establishment type in cowboy boots.

Read more from Tim and friends at The Aviary (www.tbirdnow.mee.nu).