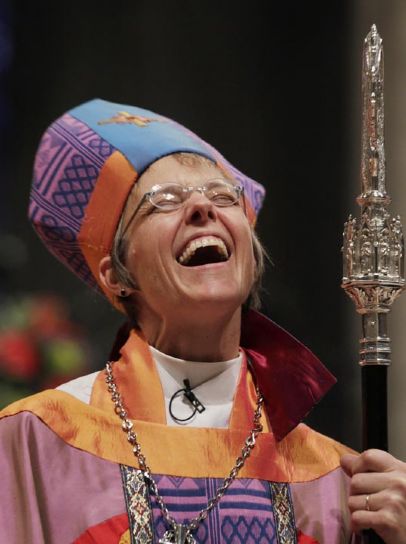 BSA Inc.’s absolutely, astonishingly stupid decisions — imposed on a membership and alumni base vehemently opposed to them all — directly mirrors the path embraced by the former Protestant Episcopal Church in the U.S.A. or simply, the Episcopalians.

I noticed Mark Alexander, the author of “Gay Pride Merit Badge” is like me a former Episcopalian.

There are too many similarities to dismiss as coincidence so I wrote an introduction, albeit hasty. You should research PECUSA’s fall noting an eerie similarity to the slow-motion fall of the Boy Scout corporation.

David Virtue MCS, DD maintains an excellent blog on the apostasy and heresy of the Anglican Communion. He also tracks the on-going growth and success of faithful, traditional Anglican bodies who broke away from the mother church rather than imperil their souls.

Indeed, BSA Inc. actually attempted their current scheme in 1972 with the so-called Improved Scouting Program which drove away half its membership within a few years. BSA was forced to walk it back, superficially at least, as the radical reinterpretation of boy scouting remains until the present. Moreover,  membership never recovered in absolute or relative measures.

Little has changed. Improved Scouting is an obsession of the Baby Boomers on the national executive committee but it remains a horrible program utterly rejected by 9/10 of American boys.

What is “Improved Scouting”?

The Improved Scouting Program was said to appeal to “modern families” known today as “single moms” but then called divorcees.  It was also intended to appeal to black urban “youth.”

At the same time, it was claimed traditional American boy scouting was tainted by the Viet Nam war. BSA must “demilitarize” to be acceptable to the new public sensibilities of cultural revolution.

The net effect was insufferability. The Soviet-like language replacing traditional explications of the Scout Oath and Law was repulsive and often deconstructed to mean the opposite of its actual meaning. The Boy Scout Handbook was dumbed down to a grade school level, Americanism was stripped year-by-year replaced by drug and sex education and brow beating to deprecate patriotism and Christianity.

In reality, the ISP was intended to conform the Boy Scouts of America to the emerging Western European political consensus of  democratic socialism.

In NATO countries, single-sex scouting programs were sex-integrated and deprecated, losing significant male membership in what was seen, from a geopolitical perspective, as a preemptive move against resurgent European nationalism.

The photo below is a BSA paid “product placement” in the popular sci-fi tv series, Battlestar Galactica. Note the uniforms are heavily red not the Boy Scout’s traditional olive drab.  Notice several girls are present – the plan was full sex integration and some units were indeed sex-integrated. [Ed: although the official records are silent, the author witnessed girl Boy Scouts with his own eyes at a council-wide gathering in 1975. His parents pulled him from the program shortly afterwards.] 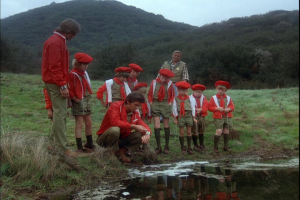 In a typically 1970’s unisex branding strategy, the feminist friendly “Scouting/USA” as portrayed in this frame from a paid product placement in the popular 1970’s sci-fi television program, “Battlestar Galactica.”

How did BSA survive thus far with its structural pacifism, feminist sex integration of the workforce, anti-Americanism, and bureaucratic control?

The ISP was thwarted by the scouting movement’s emphasis on individualism, personal preparedness, initiative, and American pride within a structured and uniformed organization.

Click here for Scouting Rediscovered’s telling of “Scouting/USA” and how Boy Scouting in America was saved in by a return to tradition and orthodoxy.

It was once inconceivable PECUSA would, by degrees, fall to Satan but fall it did. First they grudgingly accepted the “irregular” (i.e., illegal) ordination of females as #FakePriests in Philadelphia. (If you’ve wondered why BSA Inc.’s national board brags about years of law-breaking female “boy” scouts already in our units, this is their inspiration.)

Then PECUSA turned from looking away from openly homosexual priests to embracing them. Celibacy for unmarried clergymen was deemed obsolete: homosexuals were prohibited from marrying their partners in sin, thus the Bible was adjusted to accommodate. The Infamous heretic Bishop John S. Spong was a forerunner of BSA’s Rex Tilllerson and Robert Gates.

Radical revisions of canon law, the Book of Common Prayer, and hymnal

The prayerbook was changed and ancient doctrine flushed away. The form and outward appearance was deliberately made to resemble the authentic book, the better to fool the ignorant into accepting what was a radical remaking of the Episcopalian religion. Notably, Holy Matrimony was erased, replaced with something called “marriage.” (Persons to be “married” are not even required to be Christian in this “celebration” of an essentially pagan relationship.)

Had the Episcopalians healed their 400 year old rift with the Quakers?  No. It’s just Good Christian Men Rejoice was too much for the tender sensitivities of the #FakePriests and their blue hair feminist congregants to endure.

Homosexuals, females advanced through the ranks into senior leadership

Soon, open and avowed homosexuals were made into pretend bishops, Paul’s admonitions notwithstanding. Hard on the heels of that insult to God, female pretend bishops hit the scene in a word-for-word repetition of the argument for female line officers in the Armed Services: career advancement. Note the similarities to BSA Inc’s insistence the girl Venturers do everything boys do but cannot take the coveted Eagle Scout award.

National Giveth and Taketh Away “Local Option” of Conscience

Local dioceses, indeed local parishes, were permitted the “local option” clause and allowed to eschew morally offensive queer and female “bishops” . . .  for a short while. Soon enough, the church hierarchy pronounced sufficient time elapsed and all Episcopalians must accept the fake bishops without exceptions, personal conscience be damned.

If a parish attempted to flee and join, say, the Reformed Episcopal Church or one of the emerging foreign missions from Africa’s orthodox Anglican bishops, the never-ratified, backdoored church canon known as the Dennis Canon was used in court to claim parish properties were in fact “held in trust” by the national body, despite parish vestries holding clear title to their property. This was used successfully against parishes that predated the Episcopal church’s incorporation after the Treaty of Paris in 1783.

A few weeks ago, the Episcopal diocese of Washington D.C. dared claim God was no longer a “he” and vowed to eliminate all masculine pronouns from its liturgy.

With its highly political push for open borders and unrestricted immigration, the Episcopalians violate Old Testament law and bring about their own damnation.

Deuteronomy xix:14 says, “Thou shalt not remove thy neighbour’s landmark, which they of old time have set in thine inheritance, which thou shalt inherit in the land that the LORD thy God giveth thee to possess it.”

“Cursed be he that removeth his neighbours landmark. And all the people shall say, Amen.”

It should be mentioned, all the above-listed innovations, heresies and blasphemies were sold at the time as necessary to maintain “social relevance” and thereby increase membership as defined by Average Sunday Attendance. Dr David Virtue carefully documents the Episcopalian PR, their actions and the results at his blog, http://www.virtueonline.org which I’ve linked.

Membership and Sunday attendance in the Episcopalian church plummeted and thousands of parishes went out of business as elderly parishioners, remaining for sentimental reasons only, died without young families and their children to replace them. The chart below ends in 2007 before the bruising internal fights over homosexual and female bishops led hundreds of parishes to leave the church or close for want of parishioners. The steep drop ca 1971 coincides with the open push for female priestesses, abandonment of the traditional Book of Common Prayer (replaced by experimental liturgies common in the Seventies) and an emphasis on social justice at the expense of the Gospel. 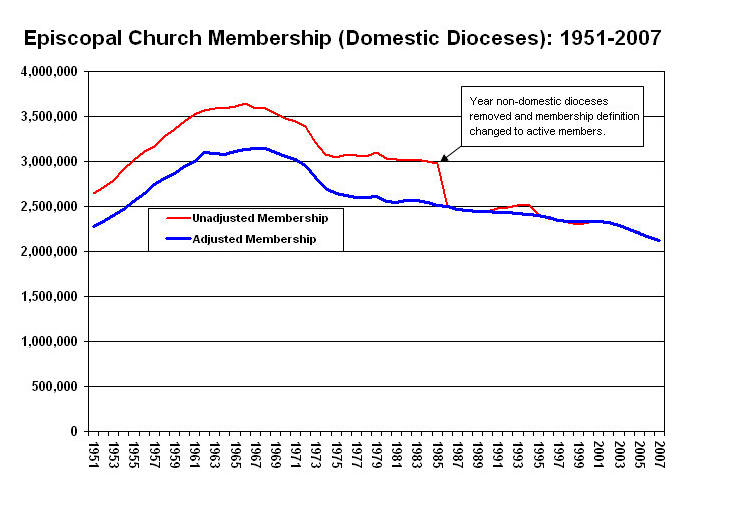 So it is with the BSA Inc., almost play for play:

We cannot simply walk away this time. There is no comparable, institutional alternative to the Boy Scouts of America. To lose it is contrary to the Scout Oath and Law and will deprive our boys of the only viable channel to learn manliness with their fathers.

Therefore, we must fulfill the Scout Oath and Law and retake our BSA.