Leave it to the Ruskies. Under command authority of Russian tasr Valdimir Putin, english-language state broadcaster RT (Russia Today) mocks the Boy Scouts of America (@boyscouts) for giving in to thrid wave gender feminism and deleting boys from the Boy Scouts. 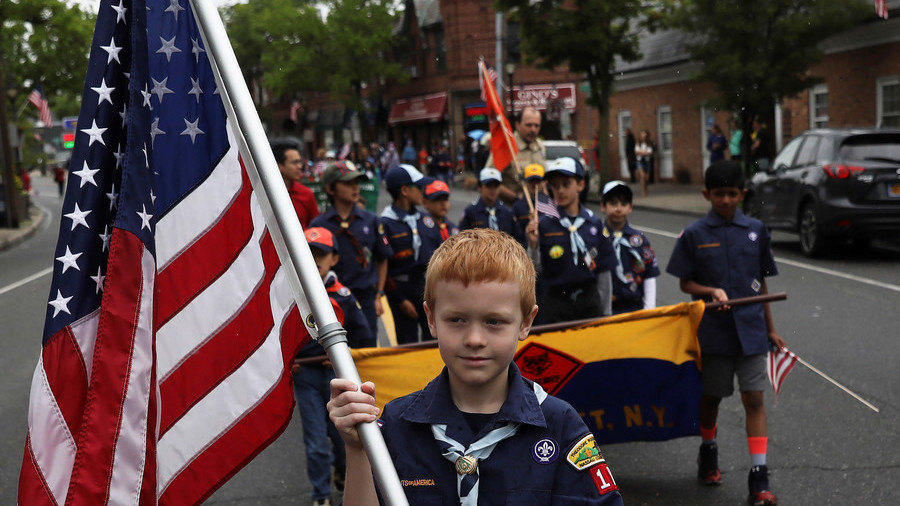 © Shannon Stapleton / Reuters
Boy Scouts of America has announced it will soon be dropping ‘Boy’ from the organization’s name, sending Twitter into outrage and disbelief. Critics of the name change say America’s young men are being intentionally emasculated.

With girls soon to be allowed to join the organization, the Boy Scouts will officially become known as Scouts BSA in 2019 to reflect the “inclusive” nature of the century-old club. The group’s board of directors unanimously voted to accept all children, regardless of gender, in October – a decision that may have been spurred, at least in part, by dropping enrollment in the club. There are currently around 2.3 million scouts in the United States – down nearly 30 percent since 2000.

“As we enter a new era for our organization, it is important that all youth can see themselves in Scouting in every way possible,” Boy Scouts of America chief executive Michael Surbaugh said in a statement. “That is why it is important that the name for our Scouting program for older youth remain consistent with the single name approach used for the Cub Scouts.” The Cub Scouts are for younger children aged 7-10.

But the name change may have been a gender-inclusive bridge too far, with some conservatives now tweeting eulogies to US manhood.

“R.I.P. Boy Scouts, 1910-2018. Yet another institution has come under siege by Political Correctness. Liberalism is slowly decaying everything that was once good in our society,” Lucian B. Wintrich, the DC Bureau Chief for the conservative Gateway Pundit, tweeted.

“This is the culture war we face. The goal of the left is to convert men into weak, feckless, cupcakes,” Allen West, a political commentator and former US congressman, wrote.

Another former congressman, Joe Walsh, shared a similar sentiment: “We’re doing our best to raise a generation of boys who will not be able to defend themselves, their families, or their country,” Walsh wrote.

Many in the Twitterati blamed the name change on “political correctness” and “feminists,” with some suggesting the club rename itself “Soy Scouts.”

Masculinity is now “toxic” & a “mental illness.” The #BoyScouts of America is dropping ‘Boys’ frm name. This is the culture war we face. The goal of the left is to convert men into weak, feckless, cupcakes. We just survived 8 years of one in the White House. Not cool. #tcot#ccotpic.twitter.com/DdCaJeNZ04

Just rename them the Soy Scouts of America. #BoyScouts

Others responded to the news by creating images of the gender-neutral dystopia that soon awaits America’s youth:

Met their demise at the hands of Political Correctness & Social Justice.

All good things must come to an end…if leftists have anything to say about it. #BSA#BoyScoutspic.twitter.com/QKDaFmx084

Critics also described the name change as hypocritical, with one Twitter user writing: “Everywhere we look, exclusively male spaces are being invaded and neutralized. At the same time, exclusively female spaces thrive and grow. This hypocrisy is unsustainable.”

Everywhere we look, exclusively male spaces are being invaded and neutralized. At the same time, exclusively female spaces thrive and grow. This hypocrisy is unsustainable. #BoyScoutspic.twitter.com/29EQ7LuuAQ

“Now that the Boy Scouts no longer exist and must accept girls, how is it possible Girl Scouts still exist, but don’t accept boys?” wrote American actor James Woods in response to the news.

Businessman and former US presidential candidate Herman Cain mourned the end of “Boy Scouts” – but warned other conservatives to avoid blowing the name change out of proportion.

“Farewell, ‘Boy Scouts,’ 108 years is a good run. Welcome, future ‘Scouts.’ …And remember, being conservative doesn’t mean you have to freak out about everything. That’s a horrible way to live. Leave it to the left,” Cain wrote.

The Girl Scouts of America has not directly commented on the name change. But the exclusively girls’ club criticized the Boy Scouts’ October decision to admit girls, telling ABC News in a statement that: “Instead of addressing systemic issues of continuing sexual assault, financial mismanagement and deficient programming, BSA’s senior management wants to add an accelerant to the house fire by recruiting girls.”

More than 3,000 girls are already enrolled in the BSA’s Early Adopter Program, allowing them to participate in the Cub Scouts ahead of the formal policy change.