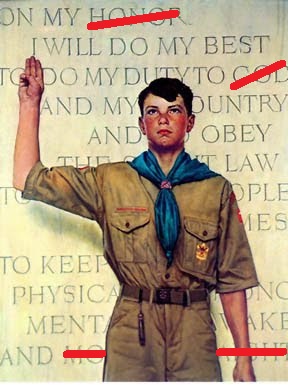 Folks, the institutional collapse of the Boy Scouts of America is one of the more stunning indicators of our nation’ moral and spiritual decline. (See my comments to AFA’s One News Now regarding the Mormon Church pulling out of the Scouts.) John Stemberger, founder and chairman of the board of Trail Life USA, deserves great credit for creating this Christian alternative to the corrupt–Trump would say “failing”–“Scouts BSA.” You cannot mix sexual perversion (proud homosexuality) with wholesomeness, wrong with right, and sin with “reverence” toward God–and still preserve the trust of parents and churches. We’ll be on the lookout for the Scouts to introduce “Safer Sodomy” (“safer sex”) merit badges anytime now. (I hope that’s a joke.) — Peter LaBarbera, AFTAH; Twitter: @PeterLaBarbera

ORLANDO, Florida–The World Organization of the Scout Movement (WOSM) released its health and safety guidelines for the World Jamboree to be held at the Summit Bechtel Reserve in West Virginia July 22 through August 2, 2019.

The guidelines require that host organizations, who in this case include the former Boy Scouts of America (now Scouts BSA),

“… ensure that condoms are readily and easily accessible for all participants and IST [staff] at a number of locations on the site. Heads of Contingent must be informed in advance and made aware of their responsibility in communicating this policy to their Participants, Unit Leaders, Contingent Staff, and IST in an appropriate way.” (See Guideline 7.3 on page 10 of the document.)

Stunningly, the World Jamboree Guideline 7.3 also has “exceptions,” allowances and instructions for the consumption of alcohol in “confined areas” at the 12-day camping event. (It appears the Jamboree guidelines were drafted after the 2015 World Jamboree in Japan in preparation for the 2019 event and were just recently released in an email.)

The 2019 World Jamboree will be hosted by three national Scout organizations: Scouts Canada, Asociación de Scouts de México, and the Boy Scouts of America (now Scouts BSA). The theme for the 24th Jamboree will be to “Unlock a New World” and promotional materials claim the event will be “a celebration of cultural exchange, mutual understanding, peace, and friendship.”

This announcement comes on the heels of the BSA changing its membership policy earlier this month to allow girls to fully participate in local Boy Scout Troop programs and their official name change to remove the word “boy” to transform into the new genderless “Scouts BSA.”

The change to allow girls into the BSA provoked a blistering response from the national Girl Scouts of America organization last year when they issued the following statement:

“The Boy Scouts’ house is on fire. Instead of addressing systemic issues of continuing sexual assault, financial mismanagement and deficient programming, BSA’s senior management wants to add an accelerant to the house fire by recruiting girls.”

“In light of the mandatory condom policy, it is not clear how far down the rabbit hole the Boy Scouts will continue to fall. With the addition of condoms and alcohol, the World Jamboree is starting to sound more like a 1960s Woodstock festival rather than a campout that parents would want to send their children to! All of this should be deeply disturbing to the churches that are chartering Boy Scout Troops. These policies present a clear youth protection problem that the BSA absolutely refuses to recognize. The fact that they are requiring that  condoms be ‘readily accessible’ and are communicating this to everyone– including youth participants–shows that the BSA is both anticipating and facilitating sexual conduct between minors at this event. These policies are both outrageous and completely irresponsible.”

More than 160 national scout organizations representing more than 200 nations and territories are expected to participate in this massive West Virginia 12-day camping event, which based on recent membership policy changes should include openly-gay boys, openly-gay adult scout leaders, transgendered boys and adults and now also girls.

Trail Life USA has over 739 local troops chartered with various churches and school organizations in 48 states. For more information on joining a troop or starting a troop with this Christ-centered, boy focused, high adventure program see www.TrailLifeUSA.com. More on the history of the launch of Trail Life USA can be found here.

http://ffpc.convio.net/site/MessageViewer?em_id=4489.0&dlv_id=8587
This article was posted on Saturday, May 26th, 2018 at 10:08 am and is filed under “Gay” Subversion of Institutions, “Sexual Orientation”/”Gender Identity” and the Law, News. You can follow any updates to this article through the RSS 2.0 feed.