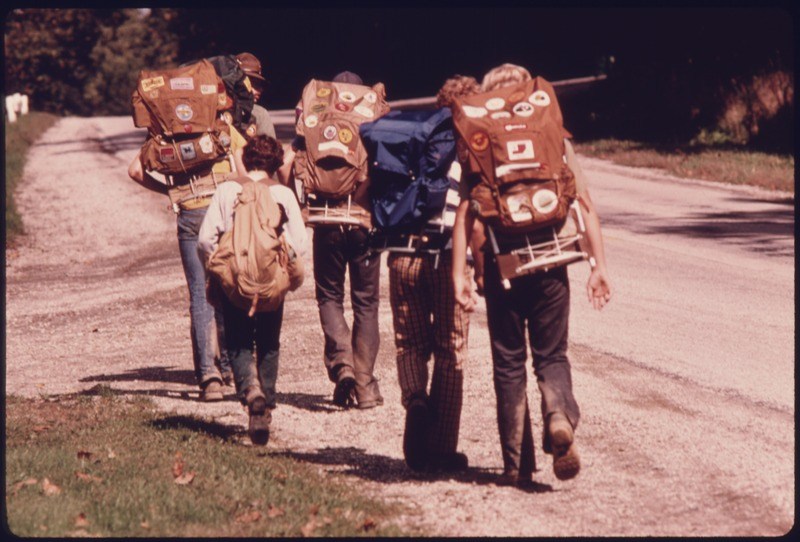 Yes, adding tens of thousands of junior feminist GoGrrlz and tomboys — and their Second Wave feminist “PhD moms” with a Social Justice chip on their pocket flap — is the smart thing for BSA Corp. to do in the age of “Pound MeToo.”

It will definitively end the sexual abuse of young boys in the Boy Scouts.

“Since its inception, [the Boy Scouts of America] aggressively marketed the wholesomeness and safety of its programs to the American public,” the complaint states.  “Simultaneously, BSA concealed from scouts and their parents BSA’s certain knowledge that pedophiles had been infiltrating BSA in large numbers for many years.”The complaint, filed Wednesday in Pulaski County Circuit Court, claims the way the Boy Scouts tried to identify sexual abusers within its organization by keeping allegations a secret and discouraging police involvement led to Samuel Otts abusing William Stevens eight times in 1979 and 1980.

Otts helped lead a troop of scouts that met at the Salvation Army in Hot Springs, Arkansas, when Stevens was in his preteens, according to the lawsuit filed by lead attorney Joshua Gillespie of Green & Gillespie.

The suit seeks compensatory damages from the Boy Scouts of America and the Quapaw Area Council for claims of negligence and fraud.

While the statute of limitations has typically long passed for those types of claims, Gillispie wrote in the complaint that the Boy Scouts fraudulently concealed their actions from Stevens.

“Plaintiff did not know or have reason to know the basis for his claims of negligence and fraud against these defendants until recently, when plaintiff discovered online the defendants’ heretofore secreted ‘perversion file’ on Samuel Otts, which contained proof that BSA knew for a certainty that Otts was a pedophile prior to his being accepted as a scout leader in Arkansas,” the lawsuit states.

Since its inception over 100 years ago, the Boy Scouts has become the largest youth organization in the U.S., with 2.7 million young people in its ranks and 1 million more adults volunteering.

Since it received a federal charter from Congress in 1916, the Boy Scouts has received several taxpayer subsidies, such as free access to national forests. It can use Department of Defense equipment and facilities for its jamborees for free, and, according to the complaint, it can even get free firearms and ammunition.

Within a few years of its founding, the youth organization established a red flag system to identify adults ineligible to volunteer in the organization. That morphed into the I.V. files – which stood for ineligible volunteer files, the lawsuit states.

According to the complaint, the most common reason a scout leader would get a file was if they were accused of sexual abuse. Those files were also called the “perversion files.”

The Boy Scouts had removed over 1,000 adult scout leaders by 1935 for sexually abusing scouts, Stevens says.

The secret files were proof, according to the complaint, “that scouting was continuously attracting pedophiles across time and geography and … of scouting’s distinctive characteristics that make it attractive to pedophiles.”

The lawsuit says that included camping and overnight hikes away from parents, ceremonies, loyalty oaths and “strict obedience to the scout leader.”

Furthermore, the Boy Scouts was allegedly lax on its policies on adult interaction with the scouts because it did not run background checks on volunteers or prohibit certain actions, like adults sleeping in tents with scouts.

But the organization’s policy towards alleged sexual abusers changed sometime before 1955, Stevens claims.

Instead of removing the suspected scout leaders, the complaint states, the Boy Scouts put them on a secretive probation program that still allowed them to interact with scouts.

“Defendant BSA went to significant lengths to keep the existence of their ‘perversion file’ system and the problem of pedophile Scout Leaders a secret from scouts and the public,” the lawsuit states. “Local councils were instructed – and agreed – not to keep perversion file materials at their offices, but rather to send everything to BSA national and destroy any copies.”

In the early 1970s, thousands of these files were allegedly destroyed. According to the complaint, the Boy Scouts have kept about 6,000 of these files, with a little less than a third released to the public.

“The exact number of sexual abuse reports receive by BSA is unknown, in part because of the mid-1970s file purge,” the complaint states.

Stevens claims the Boy Scouts and its local council in Arkansas knew that his scoutmaster had been reported for sexually abusing boys in Mt. Berry, Georgia. Instead of going to law enforcement, he says the organization facilitated or encouraged paying Otts a severance.

The Boy Scouts determined Otts was ineligible to work with scouts and placed him in the internal probation program, while keeping its internal investigation of him a secret, the lawsuit states.

When Otts moved to Arkansas, according to the complaint, the Boy Scouts did nothing to report his history to law enforcement or inform families there of the allegations against him.

Stevens claims the organization’s failures led to Otts sexually abusing him at least eight times in 1979 and 1980, when he was 10 to 12 years old.

He also says the Boy Scouts did not tell parents about alleged abuse when it was reported.

Stevens’ lawyer, Gillispie, said in an email that based on the number of files the Boy Scouts has in its possession, the scope of sexual abuse in the organization could compare to the scandal within the Catholic Church.

The Boy Scouts and its Quapaw Area Council did not immediately respond Thursday to requests for comment.

This lawsuit comes as the Boy Scouts have allowed girls into their ranks and the #MeToo movement has called attention to the amount of sexual assault in American society.

Stevens’ allegations echo claims filed across the nation. A fraction of the perversion files became publicly available in 2012 when the Los Angeles Times published them after an Oregon court forced their disclosure.

This year, the Georgia lawmakers have considered extending the statute of limitations for claims involving child sexual abuse. The bill is opposed by the Boy Scouts of America, because, as its lobbyist said, litigating something that happened decades in the past is difficult because evidence deteriorates, making the cases difficult to defend.