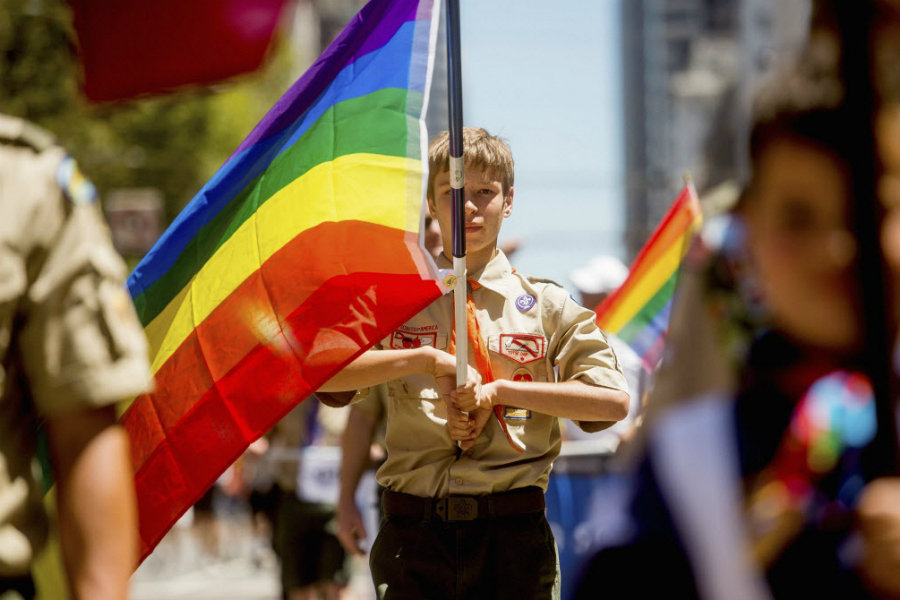 Learn your history if you want to avoid the same failure next time around.

From the Christian Science Monitor:

The Boy Scouts have tried to strike a compromise on gay rights, but the continuing uproar from both sides shows how difficult that is.

The Boy Scouts of America were expected Monday to lift the group’s controversial ban on gay adult leaders, citing a changed legal landscape that no longer allows for such a ban.

At the same time, the group reaffirmed the right of local faith-based groups, many of which sponsor Boy Scout troops, to continue to set their own hiring policies.

It’s a compromise that, in the end, is likely to anger people on both sides of the gay-rights issue and that points to the difficulty for an organization like the Boy Scouts – which is increasingly tied with religious groups – that may try to stake out a middle ground on such a fraught issue.

“You’ve got a highly divided organization,” says Richard Ellis, a political science professor at Willamette University in Salem, Ore., and the author of “Judging the Boy Scouts of America.” “Now it’s not clear that even this solution, which is an attempt to get the [gay rights] issue out of the way, can do it, because nobody is happy with it.”

In some ways, the Boy Scouts are emblematic of the struggle that much of conservative America, and particularly conservative religious organizations, have had as they try to remain relevant, and compliant with the law, in a rapidly shifting legal landscape.

The group’s position on homosexuality became an issue starting in the 1980s and ’90s, when it decided to officially ban openly gay youths and adult leaders. With their policies challenged in court, the group argued that its Scout oath to be “morally straight” implied an opposition to homosexuality and was part of the Scouts’ core message – a defense that the US Supreme Court agreed with in a 5-to-4 decision in 2000. “The Scouts got caught up in the culture war and clearly took a side,” says Professor Ellis.

As a result, its membership became increasingly conservative, increasingly tied to religious groups and churches, and less reflective of the views of overall Americans. Some 70 percent of Boy Scout troops are now run by faith-based groups. By the time the BSA considered changing its ban on gay Scout leaders in 2013, it polled its membership and got incredible pushback, Ellis says. Nearly all the councils in the Northeast wanted the anti-gay policy changed, while 80 percent of the Southern councils wanted it to stay the same. The organization worried about an exodus of members. In the end, it decided to go with lifting the ban on gay youths, but not gay adults.

By this spring, with legal decisions rapidly broadening gay rights, it was clear that that ban was no longer defensible and that the BSA would be back in the courtroom – almost uncertainly unsuccessfully – unless it changed its policies. Speaking at the Boy Scouts’ annual meeting in May, former US Defense Secretary Robert Gates, who is now BSA president, warned that “the BSA finds itself in an unsustainable position.”

A BSA decision to lift the ban on gay adults but still leave hiring decisions to the discretion of local religious-based organizations affiliated with troops might have seemed progressive if the Scouts had taken that stance 25 years ago, when many first urged it. But coming in 2015, it now seems to critics like too little, too late – a decision that will still allow for discrimination on religious grounds.

“Our position has been and remains clear – we continue to urge the Boy Scouts of America to embrace full LGBT inclusion, without exception,” says Liz Halloran, a spokeswoman for the Human Rights Campaign, which fights for gay rights, via an e-mail.

If the Boy Scouts lift the ban as expected, “this would be an important step, but recent history has shown that Americans increasingly oppose discrimination under any guise, including religion,” she adds, citing the backlash against the recent “religious refusal bill” signed into law in Indiana, which seemed designed to allow religious conservatives to discriminate against or refuse service to gay couples. (In response to the backlash, Indiana Gov. Mike Pence “clarified” the law to make clear it did not justify such discrimination.) “True leadership does not allow discrimination against anyone because of who they are.”

At the same time, Christian Evangelicals have been heavily critical of the BSA’s decision to lift the ban at all, just as some started to move away from the group after it lifted its ban on gay youths in 2013. Catholic and Mormon churches issued statements supportive of the change, provided they would continue to have control over their own hiring.

“The Church of Jesus Christ of Latter-day Saints has always had the right to select Scout leaders who adhere to moral and religious principles that are consistent with our doctrines and beliefs,” the Mormon church, which has the largest Boy Scout membership of all religious organizations, said in a statement. “Any resolution adopted by the Boy Scouts of America regarding leadership in Scouting must continue to affirm that right.”

It’s unclear how legally sustainable that position will be in the future, and some religious groups said they’re already prepared for that exemption to be challenged. Increasingly, religious grounds have been the basis for a number of recent gay rights controversies, as individuals and organizations use institutional teachings or personal religious beliefs to justify decisions ranging from the refusal to officiate gay wedding ceremonies to refusal to police a gay pride parade or photograph a gay wedding. And the extent to which religious beliefs can be used as the basis for such discrimination is likely to continue to play out in the courtroom as well as in American culture.

The rapidly changing landscape around gay rights has been hard for evangelical groups to adjust to, says Matthew Vines, author of “God and the Gay Christian” and founder of the Reformation Project, which works to make Christian institutions more welcoming toward the LGBT community. [Editor’s note: Mr. Vines’s name was misspelled in the original version of this story.]

But while he’s not surprised at the resistance to change, Vines says, he’s optimistic that even conservative Christian groups will eventually shift their views on homosexuality, particularly as members of the younger generation become leaders and more gay Christians become active working for inclusion from within.

“The foundation is being laid for a long-term change,” he says. “Change doesn’t come from the top down, it comes from the bottom up.”

Vines – who was a Cub Scout as a child – says he’s encouraged by the most recent shift, even with the exception for faith-based groups to make local decisions.

The fact that such a culturally important group had the ban in place, both on Scouts and leaders, sent a lot of negative messages about self-worth, he says, and reinforced outdated and disproven stereotypes about gay adults as sexual predators.