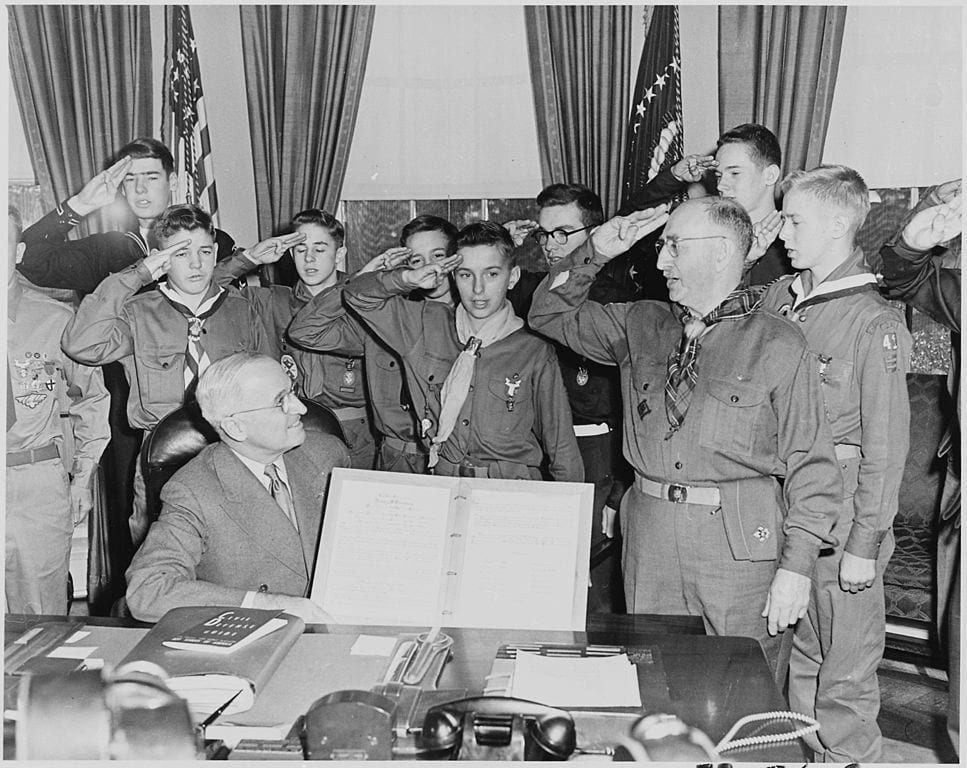 Originally published at The American Spectator

The title of this article will raise eyebrows even among conservatives, but read on. The title is accurate and undeniable.

The left has succeeded in driving a final nail in the coffin of the Boy Scouts as it once was. The organization is now a shell of its self. It capitulated first on “gay” scout leaders, then on “transgender” scouts, and now on girls joining the Boy Scouts.

Lest anyone think this isn’t a take-down, or a fundamental transformation, well, consider that the Boy Scouts of America, founded in 1910, will now be called simply “Scouts BSA” for those ages 11 to 18 (a change openly celebrated with puffy propaganda pieces by PC-stylists at the BSA website). This is a coerced inclusion of gender-neutral “Cub Scouts.”

The Boy Scouts have been emasculated, neutered. The organization that prided itself on courage stands impotent, fearful in the face of feminists and LGBTQ militants. They’ve cowered to the forces of “diversity” and “tolerance.”

And for cultural revolutionaries, the defeat of the Boy Scouts is the end of a long march through yet another institution. This march began literally a century ago not with the New York Times or Democrats but with socialists and communists.

No doubt, the notion of a long communist assault against the Boy Scouts will surprise even many conservatives. The ugly truth, however, is that American communists have been after the Boy Scouts for over a century. Marxists were hellbent on taking down the Boy Scouts prior to even the Bolsheviks taking down czarist Russia. Once again, here as well, it just took the wider liberal left a little longer to eventually align with the Marxist left.

I will not here lay out the full litany or extended paper trail of evidence, which can be found in the (less accessible) Comintern Archives on Communist Party USA at the Library of Congress or (easily accessible) simple searches of archives at the remarkable Marxist clearinghouse, www.marxists.org. What follows are several unmistakable examples beginning in 1911, with hyperlinks to the original sources:

Exhibit 1 takes us way back to June 1911, only a year after the Boy Scouts of America was established. It’s an article by a Celia Rosatstein titled “Why Boys Should Not Join the ‘Boy Scouts,’” published in The Young Socialists’ Magazine. The article portrayed the Boy Scouts as gun-hungry, pro-war, bloodthirsty capitalist fanatics. The young socialists instead urged youth to sign up for the socialist-communist faith. The Young Socialists’ Magazine promoted “Socialist Sunday Schools,” not unlike the “Commie Camps” to which New York City-based Marxist parents sent their children in the summers — a political-ideological substitute to what Christian parents commonly know as “VBS,” or Vacation Bible School. (Ex-communist Ron Radosh writes of his commie-camp experiences in his fascinating memoir, Commies.)

“Especially you boys of the Socialist Sunday Schools, do not join the ‘Boy Scouts,’” urged Ms. Rosatstein. “Persuade your friends not to do so but instead to join the Socialist Schools.”

Exhibit 2 is the March 1924 issue of The Young Comrade, an article titled, “Why We Are Against the Boy Scouts,” by Thelma Kahn. There, “capitalism” was fingered as the nefarious tool for training Boy Scouts not only to shoot guns, but to shoot their fathers and brothers (yes, seriously): “capitalism does not only train the Boy Scouts to shoot and use a rifle for its own interest but to shoot down his own father and brothers when there is a strike.” This penchant for violence ultimately marches the Boy Scout off to war: According to Ms. Kahn, “grown-up Boy Scouts” infested by the vagaries of capitalism become soldiers who go off to “fight England.” (Hmm, England?) “The Boy Scouts,” added Ms. Kahn with an added twist of the knife, “also learn how to stick people on the end of their rifles and other ignorant things.”

The delightful Ms. Kahn wrapped up with a pitch to youngsters to instead join the Junior Section of the Young Workers League.

Exhibit 3 is a full issue of Young Pioneer from July-August 1929, published by the Young Workers League of America in New York City. The lead piece focused on a shameful demonstration against 1,500 innocent boys from across America as they excitedly prepared to cross the Atlantic for an international Jamboree in England. The Young Pioneers came to rain on the parade.

At the demonstration a young Red named Harry Eisman was arrested for what even the communist publication described as “militant” behavior.

As for that Boy Scouts’ pledge to God and country, the Young Pioneer urged the youth to “Follow in Lenin’s Way.” And as an added kick in the rump of the boys, it accused the Boy Scouts of racism, publishing an alleged letter to the editor from a “Negro” boy named Leslie Boyd swearing his allegiance to the glorious Young Pioneers rather than the disgraceful Boy Scouts.

This runs all the way to modern times, especially as American communists vigorously embraced cultural issues. By the start of the new century — as seen, for instance, in a May 2001 issue of Party Builder — Communist Party USA was joining forces with the ACLU to openly condemn the Boy Scouts as “anti-gay.”

And alas, it was here that the far left found its formula. This tactic would work masterfully in redefining the Boy Scouts in the left’s own image. As cultural Marxists have taught in their universities, the trick to deconstructing America, especially its Judeo-Christian roots, is to go cultural, not economic, particularly through the perverting of sexuality and gender. The key was a cultural Marxist revolution rather than an economic Marxist revolution. That’s the ticket.

And yet, while the prime instrument against the Boy Scouts has been sexuality and gender, communists have remained capable of wild cheap shots at the Boy Scouts that smack of the 1930s all over again. An egregious example is a piece published last summer in People’s World, the successor to the Soviet-backed Daily Worker. The author was John Bachtell, head of Communist Party USA. This piece was headlined, “Trump’s Scout speech likened by some to Hitler Youth rally.”

The piece lit up the “reprehensible” Donald Trump for a “hate-filled speech” that violated “every norm of decency and morality” before 40,000 Boy Scouts at their national Jamboree in West Virginia. In a moment of confession, Bachtell conceded to his comrades that he had once been a Boy Scout. But he saw the light through the darkness of the Boy Scouts’ militaristic, jingoistic, homophobic, and racist ways. Bachtell testifies to his moment of grace, when he left the Boy Scouts for good:

This was during the height of the Vietnam War and all the militarism and the patriotic display was meant to whip up war fever and loyalty to country. Again, as someone coming from a progressive family opposed to the war, the entire show was a big turnoff.

After that Jamboree I quit the Scouts and never regretted it. I felt like I was being indoctrinated to be a cog in the war machine.

Later, I realized just how reactionary the Scouts were, including the whole ugly history of racial exclusion, segregation, and homophobia. It wasn’t until 2015, after a long struggle that the BSA adopted a resolution dropping restrictions against gay youth joining.

There in one piece, in 2017, is a summary list of communist attacks in a protracted ideological war against the Boy Scouts. It took a century, but the Marxists and socialists finally got them. They needed the help of the wider left, especially the thorough re-education in the universities. It took the wider liberal left some time to warm to the cause, but eventually liberals/progressives got there. As they typically do.

It may take a hundred years sometimes, but progressives eventually make their progress. And their latest victory is their fundamental transformation of the Boy Scouts of America.

Paul Kengor is professor of political science at Grove City College. His books include A Pope and a President: John Paul II, Ronald Reagan, and the Extraordinary Untold Story of the 20thCentury; Dupes: How America’s Adversaries Have Manipulated Progressives for a Century; and The Politically Incorrect Guide to Communism.

Paul Kengor Follow Their Stories: View More Paul Kengor is professor of political science at Grove City College in Grove City, Pa., and senior academic fellow at the Center for Vision & Values. Dr. Kengor is author of over a dozen books, including A Pope and a President: John Paul II, Ronald Reagan, and the Extraordinary Untold Story of the 20th Century, The Politically Incorrect Guide to Communism, and Dupes: How America’s Adversaries Have Manipulated Progressives for a Century.

One thought on “The Marxist-Progressive War on the Boy Scouts”